The Songkran Festival celebrating the Thai New Year is nearly upon us.  The Thai New Year falls across April 13, 14 and 15th every year and will include the following Monday, April 16 in 2012.  If you’re visiting Thailand during the FOUR DAY WEEKEND of festivities you’ll almost certainly encounter merrymaking regardless of where you are in the country, but in the cities in particular.  Foreigners are almost universally welcome – if not actively encouraged or even coerced – to participate.

While there are quiet traditions associated with the holiday in temples and and private homes, Songkran is a boisterous, public celebration wherein the streets are filled with people intent on dumping water on one another and covering their soaked bodies with brightly colored talcum powder.  Alcohol flows freely and snacks are shared.

Dry people caught observing from the sidelines are almost always dragged into the fracas and mercilessly soaked.  I once watched a mob surround a police car, drag the police out and return them to the car covered from head to toe in wet, fuchsia talcum powder.  Resistance was futile.

Where will you be for Songkran? 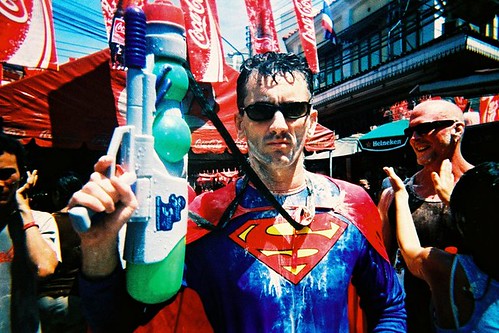